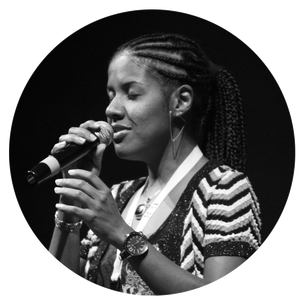 Just like the Cape Verdean diva Cesaria Evora, Gabriela Mendes was born and grew in the town of Mindelo, on the island of São Vicente, one of the nothern islands in Cape Verde.

She was four years old when she discovered the pleasure of music, by listening to her mother singing with famous musicians such as the violonist Malaquias.

The little girl Gabriela went to the Salesiana School, famous to have accomodated futures great names of contemporary Cape Verdean music (Tito Paris, Paulino Vieira, Bau, etc). Father Cristiano insisted in order she integrated the choral society of the school; she quickly became the soloist of it.

Parallel to this first musical engagement, Gabriela learnt how to sing the melodies and Cape Verdean rhythms in district festivals; she moves from mornas to coladeiras or galôpe.

Encouraged by her virtuosos friends Bau, Voginha or Bius, she understood quickly that her passion for music was taking more and more importance in her life.

At the end of the 90s, Gabriela runs concerts in pubs and hotels of Mindelo, one following the others. Her repertory was increasing and it drew public’s attention.

In 2000, she went up for the first time on the stage of a festival, that was in Santo Antão, and a few months later, she was invited at the Festival of Santa Maria (island of Sal) where she sang for 40000 people, accompanied by Cesaria Evora's musicians.
​

"My concert was a success, the critics received me like a revelation of the Cape Verdean music, I even had a very first proposal for a contract."

​At the end of 2000, a label makes her play in Paris, in first part of her fellow countrywoman Mariana Ramos. And she concluded the year 2000 with her first concert in Praia, the capital of Cape Verde, on the island of Santiago.

The following year, after having made a song recital with Bau, Bius, Djosinha, Luis Morais or Tito Paris in São Vicente, her island, Gabriela seduces the public of the famous Festival of Baia das Gatas, then at Escurralete, in the next island of Santo Antão.

In 2002, she played at the Pub Enclave in Lisbon. She is invited in other festivals, as in Fest-Vale in the island of Santiago or in Praia da Cruz in Boa Vista.

In 2003, she is selected in Mindelo among others very famous Cape Verdean artists for a tribute to Bana, before trying to conquer the heart of the audience of the 9th Festival of the Traversées de Tahitou, in France.

She will give some others concerts in France in 2004.

After a new passage to the Festival of Baia das Gatas, Gabriela chooses the Parisian stage of China Club for launching Tradição, concert followed by other events in Mam' Bia, Satellit Café (Paris), or at the Casino des Pins in Sables d’Olonne.

In 2006, she's the first singer female to sing at Baia das Gatas's festival, followed by other great names like Dudu Araujo or Tcheka. Some weeks later, she's included in two compilations: the first one is a Putumayo's playlist, the other one is Zone Franche, a french network interested by world music.

In 2007, Gabriela became a real globe-trotter: she's been seen in France (Nice Jazz Festival, Festival of Barcelonette), in Tunisia (Musiqât), in USA (SOB's in NYC), in Canada (Nuits d'Afrique du Québec). These gigs support the release of the new edition of her CD, which includes now her clip and the french translation of the song "Tradição", with lyrics written by Teofilo Chantre.

In 2010-2011, Gabriela Mendes participated in the documentary “Mindelo atrás do Horizonte” and also in the film “ A menina dos olhos grandes”. Both films were made in Cape Verde and exhibited in several international film festivals.
﻿